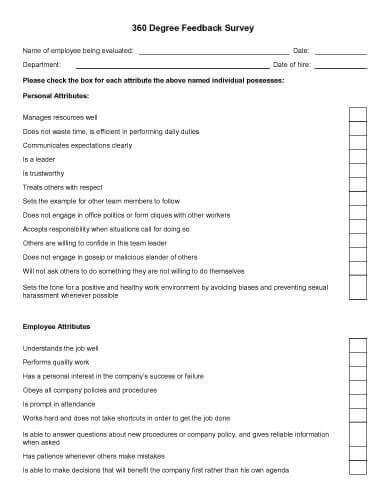 File Size: 32 KB
Downloads: 1970
Uploaded on: 2015-11-06 16:35:00
File Name: 360-Degree-Feedback-Survey.docx
Download: Free
360-degree feedback occurs whenever an individual receives input from co-workers and immediate supervisors alike in order to determine strengths and weaknesses. As such, a 360-degree feedback survey is similar to an employee evaluation, yet it does not provide specific examples of good or bad behavior. The 360-degree feedback survey will include a list of skills and personality traits that are important to a given job. It basically asks others to simply check a box stating whether or not a particular person possesses these unique features. It is not intended to be an evaluation that is used for raises and promotions, but simply a tool for people to use in order to let them know what their particular strengths and weaknesses are. This 360-degree feedback survey is for a team leader in the production department of a manufacturing firm. It will be completed by workers underneath this team leader, department managers and other team leaders. This survey is given anonymously, and then the results are tallied and given to the team leader who is the subject of the evaluation.