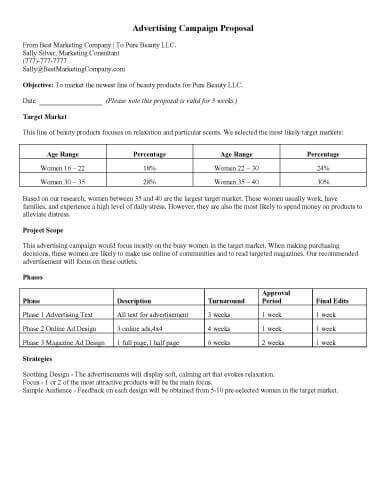 File Size: 35 KB
Downloads: 5843
Uploaded on: 2015-11-17 14:09:00
File Name: Advertising-Campaign-Proposal.docx
Download: Free
An advertising campaign proposal is a document used by advertising agencies to lay out a plan for a series of marketing initiatives. It includes all of the important details of a signed agreement including the offer from the agency, a timetable for the work, the price, and demographic information in most cases. A proposal is the first step towards a binding exchange of services. This advertising campaign proposal should include a number of sections that are carefully labeled and expanded on in detail. Often, a cover letter is added to a proposal. The proposal should begin with all of the agency or marketing professional’s contact information. That should be followed by the basic objective of the proposal and the timeframe it can be accepted in. Next, the proposal should include the intended audience, scope, phases (with timetables), all strategies and tactics, deliverables, and finally a budget. Many advertisers also include a list of previous work or examples in the proposal. This advertising campaign proposal sample is from a marketing company offering a number of design services regarding a new beauty line. This proposal could be used as a basic starting offer or as a competitive bid against other advertisers. It is meant to be read by the intended client and, if acceptable, a signed agreement page can be easily added.