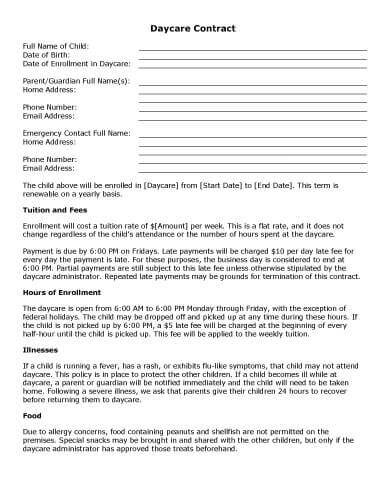 File Size: 31 KB
Downloads: 2010
Uploaded on: 2015-11-06 13:48:00
File Name: Daycare-Contract.docx
Download: Free
When parents send their children to daycare, they are trusting the daycare workers to make sure that the children are cared for and attended to throughout the day. To ensure that both sides know what sort of responsibilities daycare workers have, there is usually a daycare contract involved. This contract is a simple agreement that establishes duties and boundaries for both the daycare and the parents. As a whole, the daycare contract serves as a sort of template for how the daycare business is to be run. The name of the child to be cared for, the parents, and an emergency contact are all included. The daycare provides information about its services, outlining hours, expected pick-up and drop-off times, and the cost to be paid for the day care services. In some cases, a special note is made regarding care of sick children since keeping all of the children as healthy as possible is a primary goal of all daycare services. Some foods or substances might be banned due to allergies, and these are also usually outlined in the contract. An example that follows the general format used in many locations throughout the United States. This daycare contract sample is for a family whose three-year-old is entering daycare until the child is old enough to go to school. The contract assumes an area that tends to get hit hard by cold and flu season, and thus an additional clause about illness is included.